Today is Purple Tuesday – the UK’s first accessible shopping day, established to recognise the importance and needs of people with disabilities and other health conditions, both visible and invisible, with the aim of promoting inclusive shopping. Ironically, it coincides with World Kindness Day, acting as a reminder of how we, as a society, must use common sense to think ‘inclusivity’ at every opportunity – after all, it’s often the small things that can make a big difference to people. 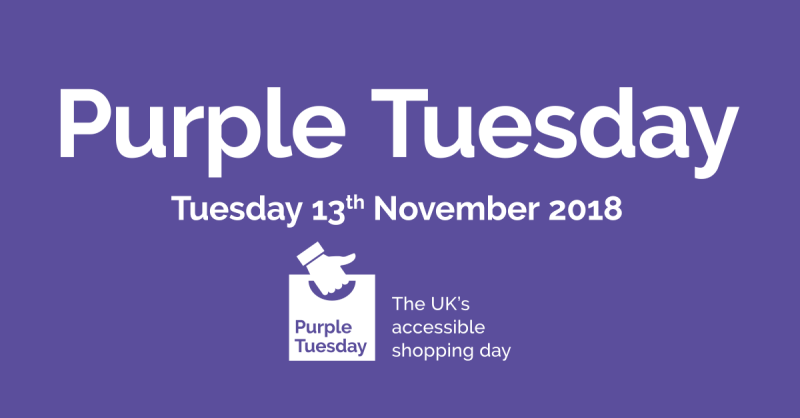 Like with most other things, people never fully understand the difficulties or implications of a given situation until they themselves experience it. Therefore, the aim of Purple Tuesday (which certainly isn’t a one-day shopping event like Black Friday), is to increase awareness of the value and needs of people with disabilities (visible and invisible), encouraging sustainable changes in business practices that improve experiences for people over the long-term.

As a young man with disabilities, and a son of someone with disabilities, every day can present additional challenges – especially when you’re out and about. I’m so pleased to see Purple Tuesday supporting Crohn’s & Colitis UK‘s ‘Not every disability is visible‘ campaign, inspired by Grace Warnock‘s accessible toilet sign, as this alone can have such a significant impact on people’s physical and mental health. In a 2017 survey, 51% of people living with Crohn’s disease and ulcerative colitis said they were verbally challenged or received negative comments simply for trying to use the accessible toilets that they urgently required. Changing the signage is one step towards improving this challenge, but another one remains in encouraging people to not judge others, simply because they may not be a wheelchair user. Having experienced the horrendous effects of Crohn’s disease myself, it is sometimes entirely necessary to use an accessible toilet – not because you think you’re better than everyone else, but because you have no choice.

People living with disabilities want to be able to lead an active and enjoyable life – and they shouldn’t be stopped from doing that, as a result of other people’s actions. More recently, since my mum’s mobility has deteriorated, she’s had to resort to using a wheelchair more often; particularly when there are long distances involved – such as the hospital, supermarket and so on. You may never fully appreciate the challenges it takes for people to even admit to needing to use a wheelchair – which has always been the case for mum, with her unwavering determination and independence. Yet, the process of requiring the use a wheelchair inevitably removes some of that independence – something which many in society take for granted.

Yet every time I push mum in the wheelchair, there’s always something that makes the process of getting about even more difficult – especially for someone supporting a wheelchair user who has disabilities themselves! I’m going to give just a few examples below of frustrating situations we’ve found ourselves in recently – all of which can quite easily be resolved (apart from the first one, which may take a little more time!)

1. If I see another flag, cobble or paving stone again…

Flags, cobbles and rustic paving stones may look pretty when they first go down, but they are so impractical. They’re not just uncomfortable to walk/wheel over, but they can also be pretty dangerous, especially when the surface becomes uneven. We were recently walking from the car park to the hospital, which involved a short walk along a flagged pavement. As the ‘driver’, I always have to keep looking for dips in the surface which I don’t want the front wheels of the wheelchair getting stuck in… because we’ve nearly been there before, when the wheelchair nearly tipped up. Similarly, dropped kerb stones are never quite ‘dropped’ enough, meaning that I either have to pull the wheelchair backwards, or angle the wheelchair in the air to mount onto the pavement – both of which aren’t so easy when you have arthritis yourself. These issues could simply be addressed, by the planners during the early days of developing new buildings and pedestrian areas, and by site managers and other professionals involved later on.

Sounds simple enough? Wrong. Have you ever tried opening a heavy door, holding it open with your foot, and then having to turn the wheelchair around to get into a building (not accounting for the high threshold which the wheels don’t easily glide over?) I know many people in similar situations will have – It’s damn right difficult! At least the ‘push’ doors make it a little easier, because I can wheel mum into the building backwards, using my back to open the door. But what would be far more easier would be to install an automatic swing door which opens at the press of a button – and in the meantime, if you see someone struggling, and you’re able to do so, go and open the door for them. It amazes (and saddens) me at just how many people happily walk by, seeing us struggle, but choosing to do nothing; though I thank those people who do go out of their way to help – it makes a difference!

Some retailers are great – many are not! I often struggle to walk down some aisles in certain stores on my own, without knocking something off the shelf, so how do you expect people using wheelchairs to get around? Far too often, mum will say, “Leave me here, and you go and look.” That’s not acceptable – and it doesn’t require that many brain cells to resolve the issue. Make some more space so that people can get around easily. You may cramp more items into the space, but you’re less likely to sell them to people who can’t get near to them!

This applies to many stores, but particularly supermarkets. You have to put everything onto the conveyer belt, pack, pay or pay for mum if she can’t reach the card reader, load the shopping onto the back of the chair, and then move before the next person… at times, it feels as though I’m on Supermarket Sweep! The simple solution here would be to have checkout lanes which are a little bit more relaxed (and a little wider than others, because it’s damn right difficult to get in front of the chair to pack, when you’re behind the chair pushing it…! Some places do this, others don’t. Also make sure that your card readers can be detached so that people using wheelchairs can pay themselves – rather than having to ask someone else to pay. Never take people’s independence away from them.

5. Drinks for diabetics, other than Diet Coke or Diet Pepsi…

I may be moving away slightly from retailers, but this is something that bugs the hell out of me! Most bars, restaurants and other dining places tend to have few low or no sugar drink options for people with diabetes – either water, or Diet Coke/Diet Pepsi! I know mum gets so fed up of having such a limited number of options… so as well as focusing on your extensive range of tonics for your gin (I’m not complaining at all about that), please also think about those, like mum, with diabetes, who really are restricted in choice, through no fault of their own!

I could talk all day about some of our experiences, but I’ll leave them for another post…!

Purple Tuesday is being co-ordinated by the disability organisation Purple, with the endorsement of the Department for Work and Pensions and support from a steering group of Purple Tuesday launch partners. They have lots of brilliant resources on their website, ranging from Site Accessibility Assessment tools, to Customer Service Guides and Web Accessibility Guides.