It is always a pleasure to meet other individuals passionate about musculoskeletal research and improving the lives of children and young people living with arthritis. Last month, Phil Bowers dropped me an email via my website, to share with me his ambitious plan to fundraise for Arthritis Research UK and the Children’s Chronic Arthritis Association (CCAA), while raising awareness of childhood-onset arthritis in the process. I was immediately struck by his sheer determination, despite his own health challenges, to cycle 2000 miles to support the incredible work of Arthritis Research UK and CCAA.

Every year in the United Kingdom, thousands of young people under the age of 16 will develop a form of arthritis. Living with arthritis can be difficult for any individual; but for young people, it can be extremely challenging, as they juggle the symptoms of their condition with school, work and relationships. I know only too well how difficult this can be, pushing you to the limits – physically and mentally. Thanks to people like Phil, charities such as Arthritis Research UK can fund pioneering research to influence the lives of people with arthritis now and in the future; while charities like CCAA can continue to provide real-time support for young people with arthritis and their families.

At just 11 days old, Phil developed septic arthritis, a type of inflammatory arthritis caused by a bacterial infection. It is sometimes referred to as bacterial arthritis. The infection began in one finger, and Phil was prescribed penicillin, an antibiotic used to treat septic arthritis.

He stayed in hospital for three and a half weeks and was on antibiotics for a further four weeks. This period of his life was obviously very difficult for his parents.

“I can only imagine what my parents were going though at such a challenging time. Even today, I can sense my mum getting upset when I ask her about it. No parent wants to see their child go through so much pain at such a vulnerable time. Their care and support over the years has been immense and I love them dearly for that.”

However, unknown to everyone, the infection spread to Phil’s hip and knee, where it has unfortunately caused long-term joint damage. As a result, Phil has grown up with physical restrictions and daily pain. He has also needed surgery to try and improve the function and mobility of his hip, but the success of this has been limited. Despite the difficulties that he has faced, he has a positive outlook on life. His diagnosis has not stopped him from trying to do all the things that he loves, including living and working in South Korea. Like many other young people living with arthritis, Phil has received comments from others who did not realise that arthritis is not just a disease associated with age. Through his ambitious challenge, he hopes to contribute to reducing this stigma.

“I hope a challenge like this will give confidence to other young people and encourage them to pursue their dreams.”

A challenge and a half

Speaking to Phil about his upcoming cycle, he said, “It will be a tough challenge, as I can only cycle stood up. My condition means that I am rarely free from pain, and I will have to limit my daily cycle to about 20 miles a day. Fortunately, I can sit on the saddle while freewheeling!”

Phil will begin his journey on Saturday 24 June 2017 – his 31st birthday! Starting in Bath, famous for its healing spa waters and home to the world-renowned Royal National Hospital for Rheumatic Diseases, Phil will journey across the South of England, before crossing the English Channel. From there, he’ll cycle through France, Belgium, Luxembourg, Germany, Switzerland and Italy. Bath was a jewel in the crown of the Roman empire and so it seems fitting for Phil to end his journey in Rome, Italy. Moreover, he plans to reach Rome on Thursday 12 October 2017 – World Arthritis Day!

Please help to raise awareness of Phil’s amazing Bath to Rome fundraiser, by sharing this post, visiting his website, and by following him on Facebook, Instagram and Twitter. If you feel that you would be able to support Phil in any way, I would strongly encourage you to get in touch with him (phil@bathtorome.co.uk)! Finally, please don’t forget to sponsor Phil as he undertakes this incredible activity, the proceeds of which will go directly towards Arthritis Research UK and CCAA. Please visit http://uk.virginmoneygiving.com/fundraiser-web/fundraiser/showFundraiserProfilePage.action?userUrl=bathtorome to donate today! 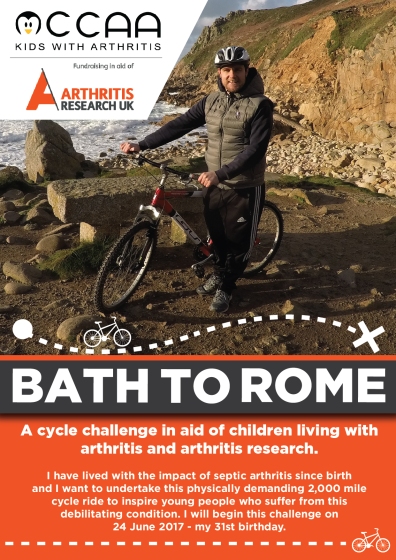