This year’s EULAR Annual European Conference of PARE will be held in Brussels, Belgium from Friday 16th to Sunday 18th February 2018, and is hosted by ReumaNet. The 2018 theme, ‘Don’t Delay, Connect Today!’ builds on the theme of 2017 conference in Portugal, with the aim of working together towards prevention, early diagnosis and access to care of rheumatic and musculoskeletal diseases (RMDs).

This will be my fourth EULAR Annual European Conference of PARE that I have attended – and I have to say that it is one of the conferences that I look forward to the most. I love that the conference is led for and by patients and patient representatives, but it is done in a way that stimulates discussion, enables collaboration, and empowers everyone who attends to return to their respective countries to implement change for the better. While those of us in the know are familiar with the structures and acronyms, others aren’t – so here is a little background to EULAR, what PARE stands for, and a bit more about the conference – and how you can join in this year, even if you’re not attending in person!

The European League Against Rheumatism (EULAR)

The European League Against Rheumatism (EULAR) is an international organisation which represents people with arthritis/rheumatism, healthcare professionals and scientific societies of rheumatology across Europe, and beyond. The aims of EULAR are to reduce the burden of rheumatic and musculoskeletal diseases (RMDs) on individuals and society, and to improve the treatment, prevention and rehabilitation of RMDs.

EULAR fosters excellence in education and research in the field of rheumatology. It promotes the translation of research advances into daily care and fights for the recognition of the needs of people with RMDs by European governing bodies.

EULAR is a truly pan-European organisation fostering a multitude of activities in areas of research, patient care, and education. To manage and promote its goals effectively, EULAR has a structure of committees and managerial bodies to help oversee and deliver work on a national and international level.

The General Assembly is the highest authority of EULAR. It is composed of both member organisations and corporate members’ delegates and the members of the Executive Committee. The General Assembly meets once a year on the occasion of the Annual European Congress of Rheumatology.

The Executive Committee is the managing body of EULAR and deals with scientific, educational, administrative, financial and organisational matters. Members, elected by the delegates at the EULAR General Assembly, serve for two to four years and meet three times a year.

The Scientific Programme Committee is responsible for the scientific and educational content of the annual congress and the organisation of all related sessions. This also includes PARE (People with Arthritis/Rheumatism in Europe) and healthcare professional sessions, prepared by dedicated working groups in the PARE and Healthcare Professional Standing Committees.

The EULAR Standing Committees are set up to manage and perform the various activities of EULAR on behalf of the Executive Committee. Currently, eight standing committees are in place, covering the major areas of activity of EULAR. These include:

The EULAR Secretariat, located in Kilchberg, Switzerland, fulfils many functions: in addition to serving EULAR’s member organisations and its Executive Committee, the Secretariat’s main functions are to run the growing education programme and activities that EULAR delivers each year.

The Standing Committee of PARE

The EULAR Standing Committee of People with Arthritis/Rheumatism in Europe (PARE) unites representatives of RMD patient and carer groups around Europe to work together towards improving the quality of life for the 120 million people in Europe living with these conditions. The national organisations of people with RMDs across Europe work together via the EULAR Standing Committee of PARE, whose vision is for people with RMDs in Europe to be empowered to lead full and independent lives.

The primary aims of PARE are to:

To achieve these aims, the committee organises a range of high quality activities and programmes – one of which is the annual European conference of PARE. The Standing Committee of PARE is currently chaired by Nele Caeyers, who is supported by the PARE Board, which includes individuals elected from EULAR national member organisations, from organisations that have a co-opted individual in the Standing Committee of PARE, and ex-officio members (Chair, Vice President of EULAR, Vice President-elect/Past Vice President, and Chair-elect/Past Chair).

The current members of the PARE Board include:

The EULAR Annual European Conference of PARE (often abbreviated as the PARE Conference) is a EULAR-only network event and takes place once a year in or near a European city location. Each year, the conference is dedicated to a different topic, with keynote speakers, debates and workshops spanning the three days. What is so incredibly special about the PARE Conference is that it is led and delivered by patients and patient representatives, with meaningful collaboration with healthcare professionals and researchers in the design, preparation, delivery and evaluation of every aspect of the programme. Through a mixture of participatory workshops, plenary sessions and networking opportunities, delegates at this conference are able to learn so much more than conventional conferences, and this is reflected each year through the demonstration of high quality national activities which have taken place for people with RMDs. As well as being by far one of the best organised conferences that I have ever attended, it is also the friendliest conference too! What I find incredibly moving, year on year, is the extremely close relationship that delegates make – it’s where colleagues become friends, with shared visions, and a commitment to making the world a better place. What an honour it is to be able to attend, and to share these few days with amazing, talented and inspirational individuals.

As part of this year’s conference, Young PARE have, for the first time, integrated their youth meeting into the overall PARE Conference, with a youth-led event taking place on Thursday 15 February 2018, immediately before the conference. Young PARE are also hosting three workshops across the conference, which focus on supporting young people with RMDs in school, and on delivering campaigns which promote early diagnosis for young people with RMDs.

So without further ado, here’s a teaser about what is planned over the next few days from Dieter and Nele! 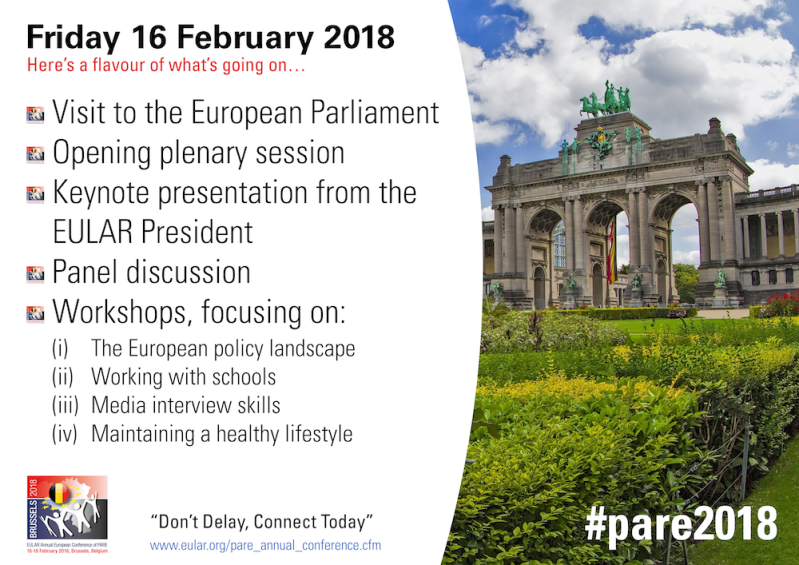 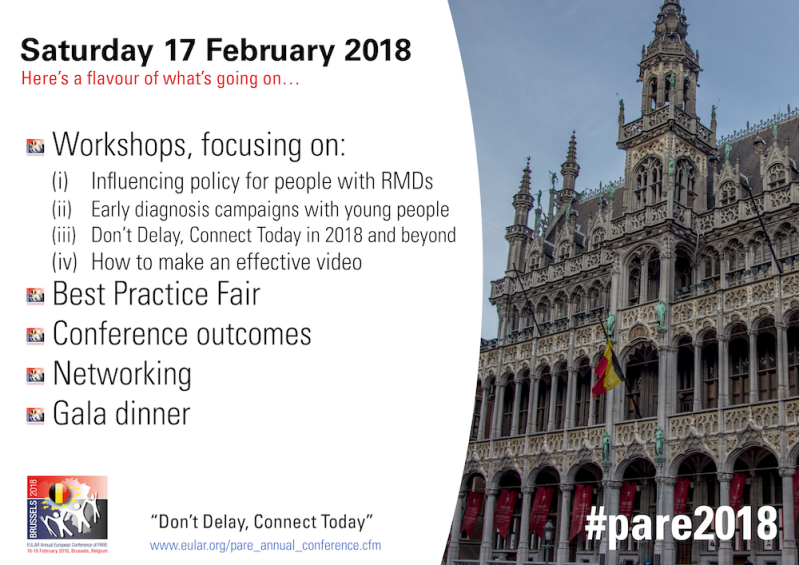 Join in – wherever you are!

Since 2014, the PARE conference has been live-streamed in places, and 2018 is no exception! Check out the streaming schedule here and be sure to watch the live stream below:

We will also be using social media throughout the conference! Please follow EULAR, EULAR Young PARE, World Arthritis Day and EMEUNET on Twitter using the hashtag #pare2018. As always, you can follow updates from me on Twitter too at @SimonRStones. 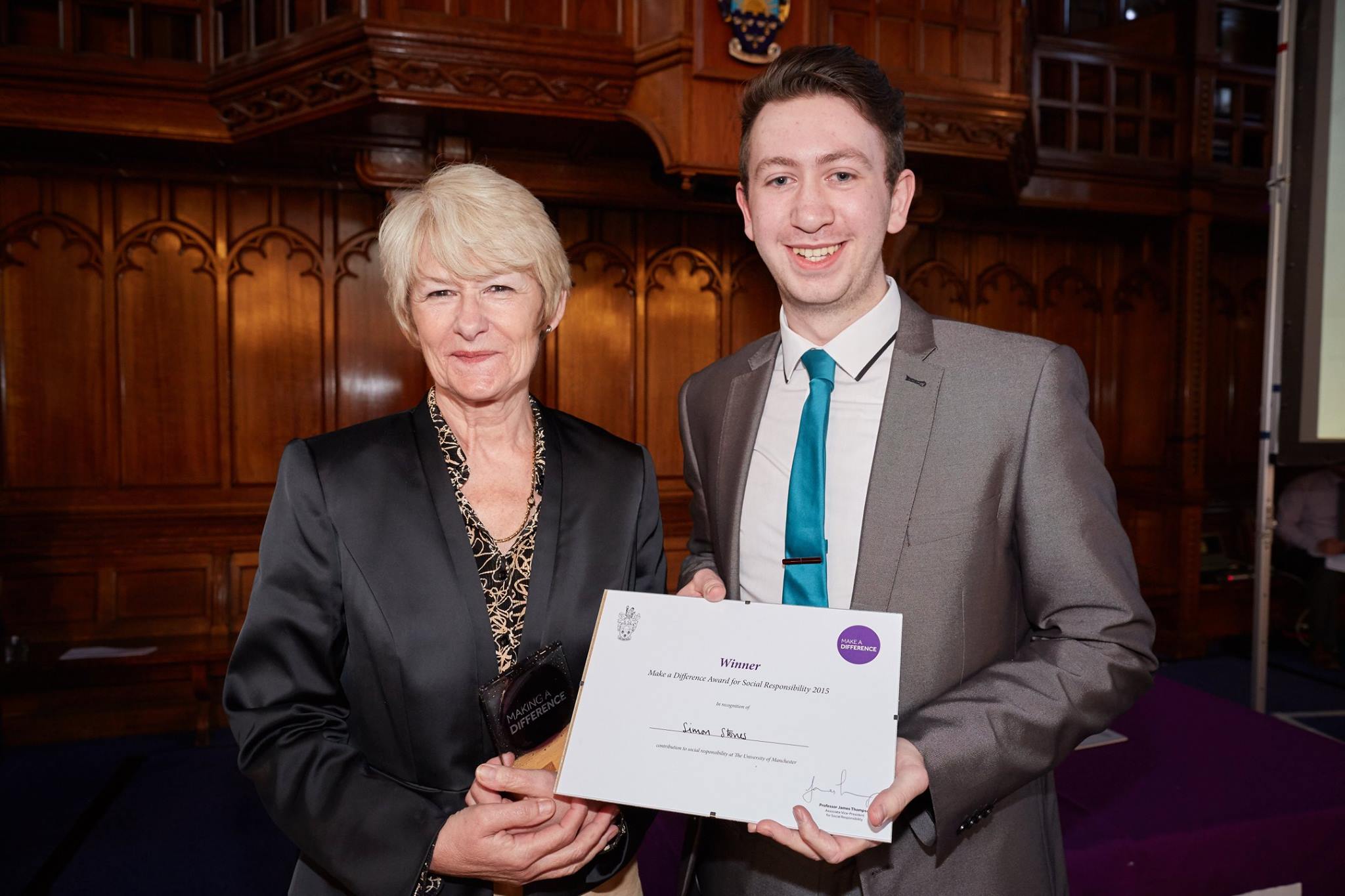 Inspired by his personal experience of long-term conditions, and his involvement in research as a young person, Simon is now pursuing his dream of helping other young people as a patient and academic researcher.